DrummerDB is a proof of concept database system in very early stages. It is modeled after traditional relational SQL database systems such as Postgres and Microsoft SQL Server.

It's primary purpose is to try and enable users of a database system to "own" their data. It attempts to achieve this by allowing for the rows of a table in a database system to be stored elsewhere from the main database host; usually by another instance of DrummerDB under "control" by the respective users. It determines ownership by use of a "data contract", which is a software defined item similiar in implementation to an ACL (Access Control List) but expanded to include definitions for resolving referential integrity, location of data, and other items.

Data ownership is a tricky concept. Once someone has read data, all bets are usually off about maintaining secrecy and authority over it.

The real world implications of this is that unless someone can be assured of all the touch points of data - from capture, transport, and storage, it is very hard to be assured that a user has full authority over their data. I want to acknowledge this up front.

There are a few concepts that DrummerDB tries to model. They revolve around data ownership and sharing of data, described as a "cooperative data model."

To own your data in DrummerDB also means that your data should be portable - regardless of the application tier that sits above it. 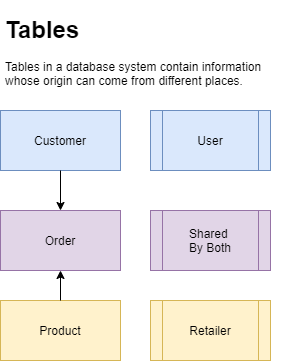 In the previous diagram, there is a customers table, where the customer information is stored, such as the first name, last name, shipping address, and so on. The origin of this data is the user who is on the online retailer's website. They are the owners of their own information.

There is a product table, which contains various products that the retailer will be selling. It's origin is the online retailer itself.

There is also a table where the two data points are combined when a customer places an order. This data is owned by both the retailer and the customer.

DrummerDB tries to account for ownership by allowing the schema for a database to be split between different database instances. In the previous diagram, rows in the Customer table are not actually persisted in the retailer's customer table. Instead, references and hashes of the data are stored to the correct database instance that contains the actual information for each row. The customer's instance of the retailer database can be anywhere a DrummerDB database can be brought online: within the same instance, or on a hosted instance under the actual customer's control, or any other implementation in-between.

The customer's instance of the retailer's database is called a partial database. For most purposes, it behaves exactly like any other RMDBS database, except that it only contains tables that pertain to the user or data tables that are shared between the customer and the retailer. In DrummerDB, the customer is known as a participant of the database system.

The retailer's instance of the database is called a host database. It contains data that pertains to the retailer, or is shared by the retailer and the customer.

To determine where data will be saved, who has access to it, and how changes and references to data are reconciled, before a customer can instantiate a partial database, the retailer defines a "data contract."

There are some considerations that have to be made when implementing DrummerDB, including:

This concept of data ownership and data portability is not unique. There are other projects that are attempting to accomplish similar things:

DrummerDB is being written in C#, chosen for my familiarity with the language. I don't consider myself to be a seasoned C# developer, nor do I assert that I fully understand database internals.